Holiday Hours: The Verdura Gallery will be open Monday-Friday 10am - 6pm and December Saturdays 11am - 5pm
X

The Verdura Whitney Tiara Shines at the Met Gala

Verdura’s exceptional vintage “Feather Headdress” tiara shined at the 2022 MET Gala, the first time it has been worn since its debut in front of Queen Elizabeth II at Buckingham Palace in 1957. An original commission for Mrs. John Hay (Betsey) Whitney, the tiara was worn by Hamish Bowles, Global Editor at Large, Vogue and Editor-in-Chief of The World of Interiors as he co-hosted the live coverage of the red-carpet arrivals.

Part of Verdura's Museum Collection, the yellow gold and platinum tiara designed by Fulco di Verdura as a feather headdress is composed of 36 leaves, set with 1,223 diamonds weighing 28.32 carats.

In 1957, American socialite and philanthropist Betsey Cushing Whitney commissioned Verdura to design a tiara for her to wear at the presentation of her husband, Ambassador John Hay Whitney, at the Court of St. James.

The Met Ball marks the first time the tiara has been worn since its 1957 debut for Queen Elizabeth II.

In lieu of the customary practice of renting a tiara in London it was important to Mrs. Whitney to represent American design and craftsmanship. The tiara, designed by Fulco di Verdura, was made in New York City workshops.

Tiara inspiration: "The Indian Headdress design had become an American symbol of freedom, made iconic by Augustus Saint-Gaudens, the sculptor who designed the $10 gold coin in 1907 featuring the head of Lady Liberty wearing a war bonnet." 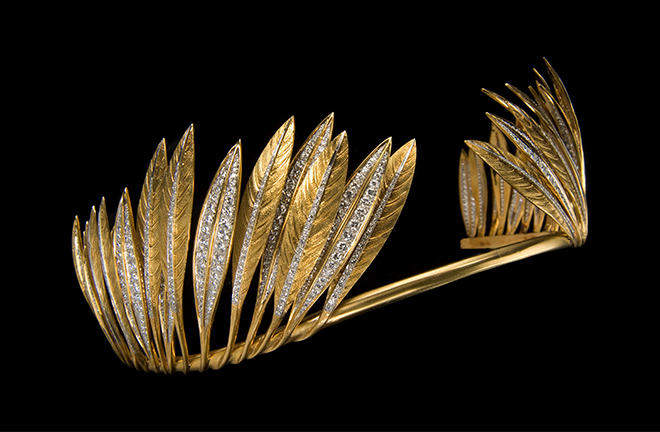 The Costume Institute’s 2022 spring exhibition, In America: An Anthology of Fashion—the second of a two-part presentation—will explore the foundations of American fashion through a series of sartorial displays featuring individual designers and dressmakers who worked in the United States from the 19th to the mid-late 20th century.